Increasing maximum available memory testing. How to get better results?

I think this is not a question about library. However, as experiment, I am running an example from box2D library for processing named Liquidy.pde where I changed the sketch sizeto (600,300) and tested 3 renderers (default, JAVA2D and P3D). P2D was way too slow to be considered at this point. I am printing the total memory, allocated memory, free memory, n of particles, fps in the title of the sketch. I am also declaring the sketch to run at 60 fps using frameRate(60); I have tried to increase maximum available memory, but when the option was disabled, I have got a slightly better performance in fps.

When running the sketch, a click of mouse will generate a particle system. 10 clicks would generate an environment with about 1000 particles, and 15 clicks will stay around 1700. See attached picture:

Disabling the "increase maximum available memory" in preferences (and restarting?) made default renderer and JAVA2D to perform a little better when running 15 particle systems. From ~20fps, they jumped to 25fps.

I am not running out of memory and I wonder if there is any way to improve the performance of my sketches. Thanks 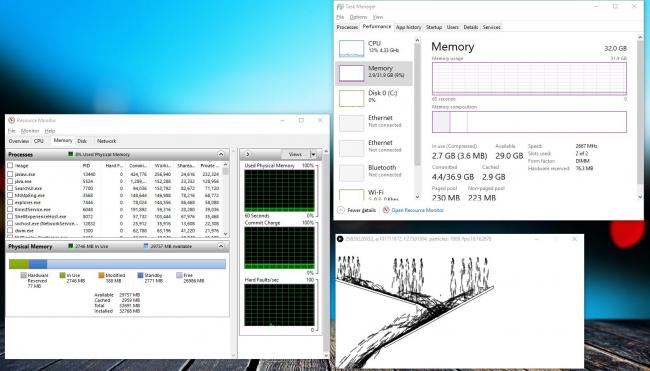